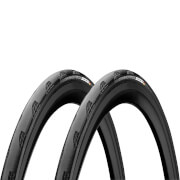 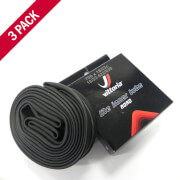 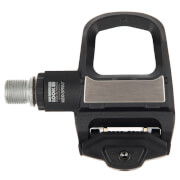 The Grand Prix 4000S II boasts global appeal as the best all round race bike tyre on the market. Not only is it fast and super grippy, thanks to its state of the art BlackChili rubber compound, but it is also tough with a healthy tread layer and of course Continental's Vectran anti puncture breaker layer underneath. So for reliability, longevity and all out performance for your race machine, the GP 4000S II is the only choice.

How are these figures possible? The carbon filler particles within the rubber compound are reduced to 1/10th of the size of standard carbon particles. This creates a closer knit with the particles having more points of contact with each other, thus forming a tighter bond, (increasing mileage performance) and also with the road (increasing grip). Also the way in which the particles interact with each other has a dramatic effect on reducing rolling resistance. Black Chili is used by several ProTour and Continental teams as shown opposite.

The all new Vectran breaker belt, developed and patented by Continental, surpasses even the famous puncture resistance of the former leader in this category, the GP3000. The extremely strong Vectran fabrics are more flexible and lighter than all other puncture protection materials. Vectran offers more resistance to cuts than Aramid, is five times as strong as steel and features less weight than a nylon double breaker. It also maintains strength in the wet.

Love the grippyness of these tires! Looks cool with the silver reflective strip, but they are not uniformly applied to the tire so the stripe undulates on the rim!

Excellent gripping tire in wet conditions and reflective strip is a smart idea for low light riding through those short winter days.

Aboslutely my go-to tire!! As a randonneur & ultra cyclist, I put a ton of miles on tires, so I want the best value, longevity and consistency. I used to buy-in to some of Conti's stiffer, less expensive tires for durability and longevity, saving the 4000S II for my race bike and 1200k's, but I noticed zero decrease in durability and longevity. For several years, this has been my only tire. I routinely get 4000+ miles and in Texas our roads aren't exactly kind to tires. LOTS of chip & seal roads, potholes, and normal road debris like sticks, glass, etc. My 4000S II's provide wonderful peace of mind and I absolutely adore the reflective strip!! I know it may not be the one thing a motorist sees, but combined with all my other reflective and lights, I love having that added safety feature.

These are my go-to year-round commuter tire. I go with the 25 mm version and they are remarkably puncture-resistent as well as being quite light and lively. The reflective sidewall is a huge advantage when riding in the dark winter months....

Only 30 miles so far so don't know how they will hold up. Easy to mount on my wheels. I have has conti gp in the past and they have been great tires.

Really grippy and predictable when they start to slide. Great puncture protection too which is a bonus in the winter month's.

These tyres are the best ones I've ever used,and I've been through a few.Get some NOW you won't regret it.PBK service once again brilliant.